I hope that everyone enjoyed a Merry Christmas or at least got through it unscathed. For those who have a family member who has autism who does not enjoy all the changes and sensory stimulation Christmas brings with it, it can be a difficult and isolating time.

Everybody else seems to be having fun with family and friends and that is very tough.

We had a blissful run, Christmas Eve, Day and Boxing Day when Zach was happy and calm. He really likes the three of us to be together, relaxed, happy and smiling.

Normal service has been resumed though and we are back on the roller-coaster which is autism.

As the New Year approaches we have been asked on numerous occasions what we will be doing on New Years Eve.

Its a good question, a conversation opener unless you are asking someone who has an adult child who has autism and no evening support.

When was the last time John and I went out to celebrate New Years Eve? About 23 years ago! That’s a while, I can’t remember where we went or with who….no doubt we will be doing what we usually do on NYE and that is go to bed at the same time we go on every other day of the year.

I was listening to the radio today while pottering about in the kitchen and ‘Our House’ by Madness came on. I can remember that being in the charts at New Year in 1982.

It got me thinking about that particular NYE at a time when I could go out and party.

My parents often went away at New Year and our house was usually party central. On this particular year we hatched a plan which looking back and possibly even at the time was not a great one!

We went to a tiny little club in Stansted Mountfitchett which had a dance floor that held about 5 people as long as they weren’t dancing energetically!

Stansted Mountfitchett is about 45 minutes from Hertford and we had to try to fit about 25 people into 4 cars which was a squeeze!

The initial plan was to see the New Year in at the club and then go back to our house. It shouldn’t have been a surprise that the club was not exactly buzzing and we left within about an hour of arriving.

Fortunately, or so it seemed at the time there was lots of alcohol at our house, we had music and so we all squashed into the cars again and headed back to Hertford.

And so once again we partied at 97 Ware Road, wkept our poor neighbours awake and all drank far too much. The evening was scattered with laughter and dancing, tears and break ups (as were a frequent occurrence when we were young). Some one started the evening with one boyfriend and finished it with another, there was plenty going on.

We all fell asleep in the early hours of the New Year, bodies in sleeping bags everywhere.

A good friend John, didn’t have a great relationship with alcohol back then and was frequently sick. When we woke up in 1983 we were told that John had been vomiting a good part of the early hours and the toilet in the bathroom was blocked!

Once we were all up and ready to face the day we tried to work out how we would unblock the loo.

John was renowned for fixing things, he always found a way to resolve and get around problems. On one occasion while out on his bike with another friend one of them punctured and when they found that they didn’t have a spare inner tube between them they stuffed the tyre with grass and cycled home 25 miles on it!

John’s plan for our toilet was to run the hose pipe from the outside tap along the length of our landing (which was quite a long way!) and down the toilet, to then turn the tap on at high pressure which was going to unblock the toilet apparently.

So the hose was thrown up into Charlotte’s bedroom window and run through the house and was down the toilet ready to work wonders when someone shouted up the stairs ‘Your Dad and Mum are home’!

‘Course they are’ I shouted back…. ‘they really are’ was the reply!

People began to grab their stuff and head out of the back door while we opened the front door rather slowly!

There was a handy passage down the side of our house which party goers waited in until my parents were safely inside.

I guess you can imagine the reaction, and understandably so! My Dad was very fond of John (hose pipe John) but not especially on that New Years Day.

I couldn’t understand what they were doing coming home to THEIR house on New Years Day! It was all wrong surely, they weren’t meant to be home yet! But due to one of their party being unwell they had come home early and they came home to find a trashed house with a garden hose running through it, that there had been under age drinking and our neighbours were only too happy to inform them of the shenanigans which had gone on into the early hours.

The hose was swiftly removed, not having worked and a plumber was called out (on New Year’s Day, think of the call out cost!) and both my parents were absolutely furious about it all.

Obviously as a home owner myself now, I understand entirely why they were disgruntled to come home to what they found.

What I didn’t understand and still don’t to this day is why they thought it was all my fault! Somehow Sophie, Charlotte and Julia’s part in this party was totally ignored. My boyfriend, Tim who was a vicar’s son and unlike many of my boyfriends my Dad liked, jumped valiantly to my defence but his protests were dismissed and the blame lay firmly with me.

Did we learn our lesson?

Of course not, we always had a party when my parents went away. Fortunately they always warned us the day before they were due to home to give good warning!

As this is just about the end of 2018 I would like to give huge thanks to all my friends for their ongoing support and very generous assistance. It means the world to know we have your support and knowing you are there through all the tough times.

I had hoped to move forward with finding a home which Zach could begin to transition into this year but haven’t achieved it or made any real inroads yet.

I am worried by the lack of housing opportunities in Hertfordshire for young adults who have autism and complex needs.

These are young people who have often tried the short break units the County has for children to give carers a break and the unit has failed to be able to continue due to the complexity of need. The time they have spent away from the family home is so limited.

Transition needs to start early, it will be a long and difficult journey but it must start!

Zach can’t live with us forever because we won’t be here forever, he needs a forever home which is his and tailored to his needs which he can start to very slowly get used to.

Transition cannot be ignored by social services it should be addressed as a priority for those who need it.

At a talk I went to recently about housing opportunities in Hertfordshire almost the opening line was ‘we prefer people to remain in the family home’!

I love Zach with every last ounce of breath in my body and it will break my heart setting him on the journey to a new home but rationally I know it needs to be done.

It would be far more unfair and cruel for Zach to live with us until one or both of us were no longer here!

We have, thanks to the massive generosity of friends and family got our social enterprise off the ground. Thanks so much to everyone who contributed to our crowd funding, and who purchased our cards.

Our artist Laura Dixon has caught our ideas and concepts perfectly and we were all thrilled to see her illustration in print. 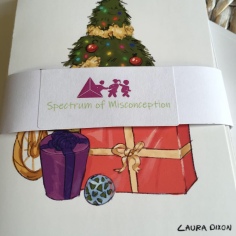 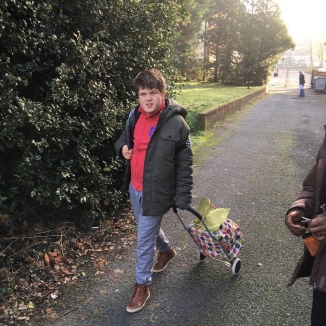 We sold 1500 cards which exceeded our expectations, Zach helped pack them up and take them to the post office which was at times challenging for him. I hadn’t considered how busy the queues would be in PO’s at Christmas but he coped brilliantly.

Our Spectrum of Misconception website is now live and can be found at http://www.spectrumofmisconception.com. It is a massive learning curve for me so I would be grateful for any feedback. I would also appreciate feedback on our cards, what you liked and what you didn’t if you get a moment.

We have more Spectrum of Misconception products in the pipeline, these are far more niche though so we need a sales strategy…as a nurse of 28 years I never thought I would say that!

All that is left is for me to wish all you wonderful people a smashing 2019, it feels like a massive step into the unknown with so much uncertainty in our own country and the world but look out 2019 I’m coming to get you!